Yahoo Native now introduces Dynamic Creative Optimization (DCO) and Multivariate Ad Testing for all advertiser accounts. This new feature capability enables advertisers to define in advance the creative elements and let the system dynamically optimize to their most effective combinations in their native ad campaigns. Success is evaluated on the basis of CVR.

The feature is available on native for single image ad formats and currently only through bulksheet.

Using DCO, you can now test user-controlled features for your campaigns. That means, you can choose 3 specific attributes for DCO - Title, Description, and Image - and three variants for each of those 3 attributes (a maximum of 27 combinations in all [3x3x3]).

Note that you don’t have to use all 3 attributes included in DCO. For example, you can choose to set 3 options for the Title, 2 options for the Description, and 1 option for the Image. This will make DCO work with 6 ad combinations only (3x2x1).

Once you submit disaggregated creative elements that can be mixed together, DCO systems will test and conclude which creative element combinations produce the best results for you, without having to test every possible combination. Success is evaluated on the basis of CVR.

The DCO algorithm will optimize to the ad combinations with the higher CVR.

This case study example illustrates how a digital bank was able to optimize their Native ad campaign results and increase their lower-funnel conversion (CVR) by as much as 54%. 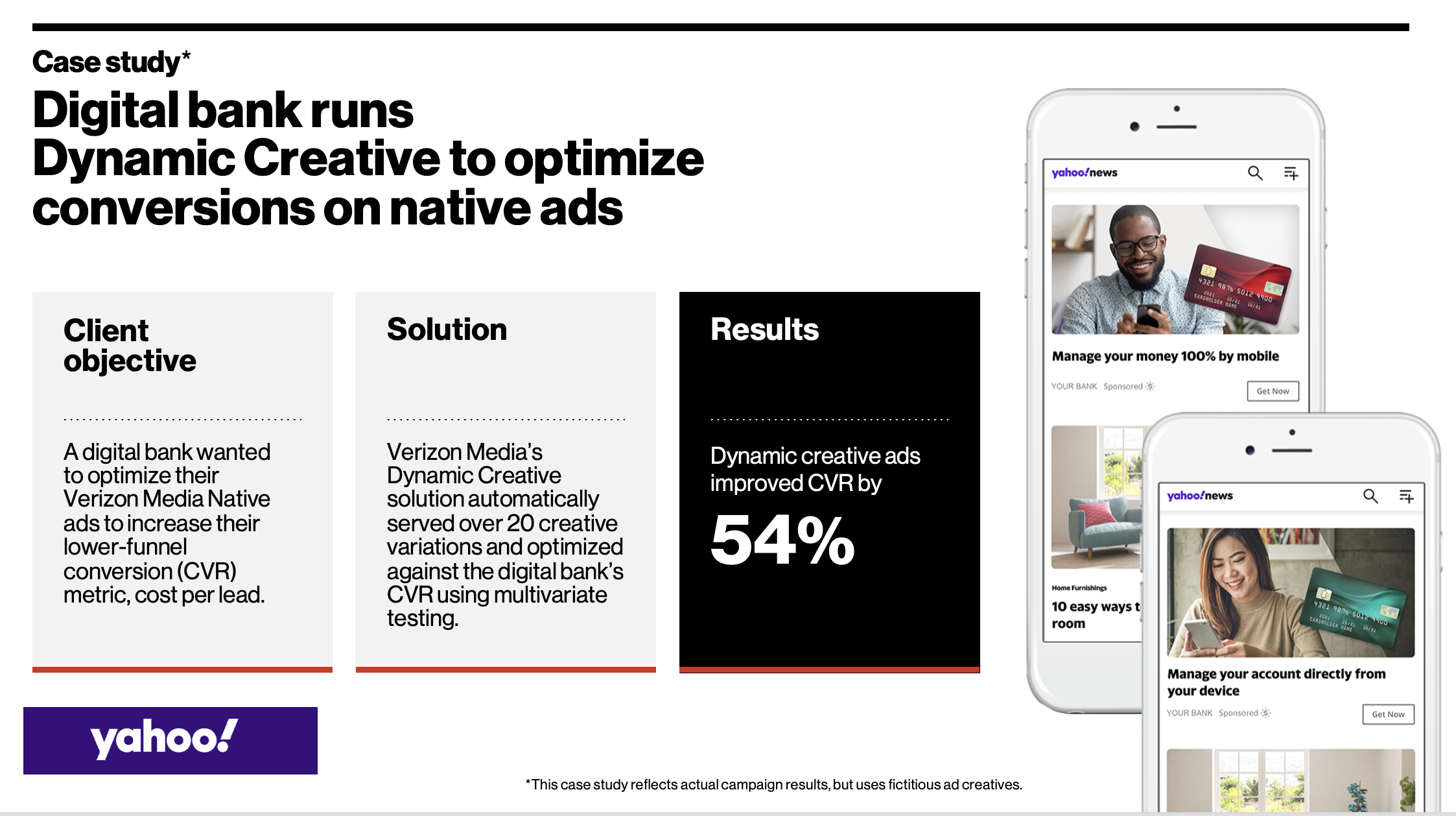 Creative elements for DCO optimization may include the following, with variants of all three attributes:

On Native, DCO works as follows:

For campaign setup, all your assets need to be uploaded through the bulksheet.

The following is a sample definition of DCO Ad Assets in the bulksheet input:

Reporting is available at these levels:

How to Add the DCO Level to the Ad Performance Report¶

The following illustrates a sample report file and a screenshot from Ad Platform UI: 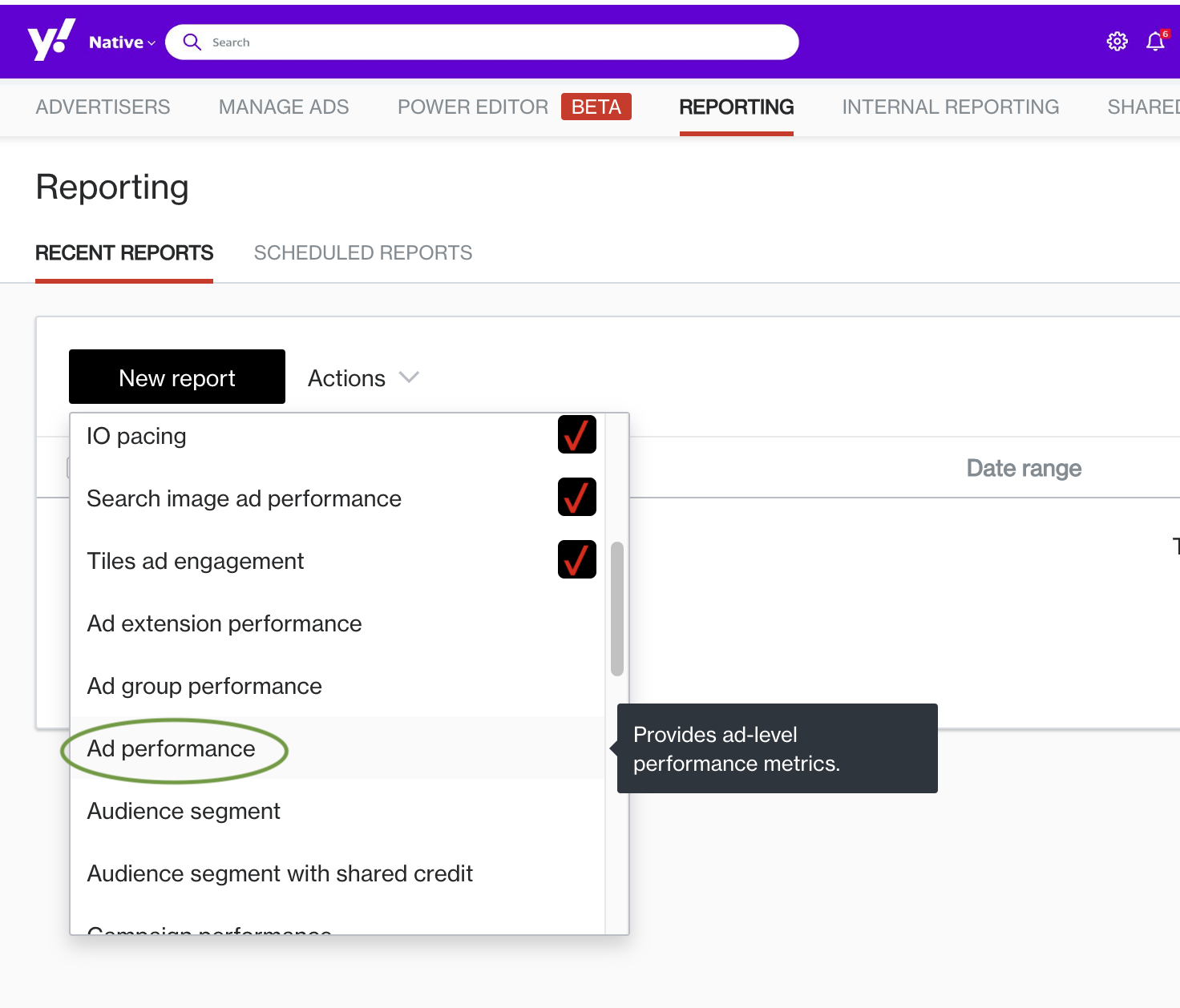 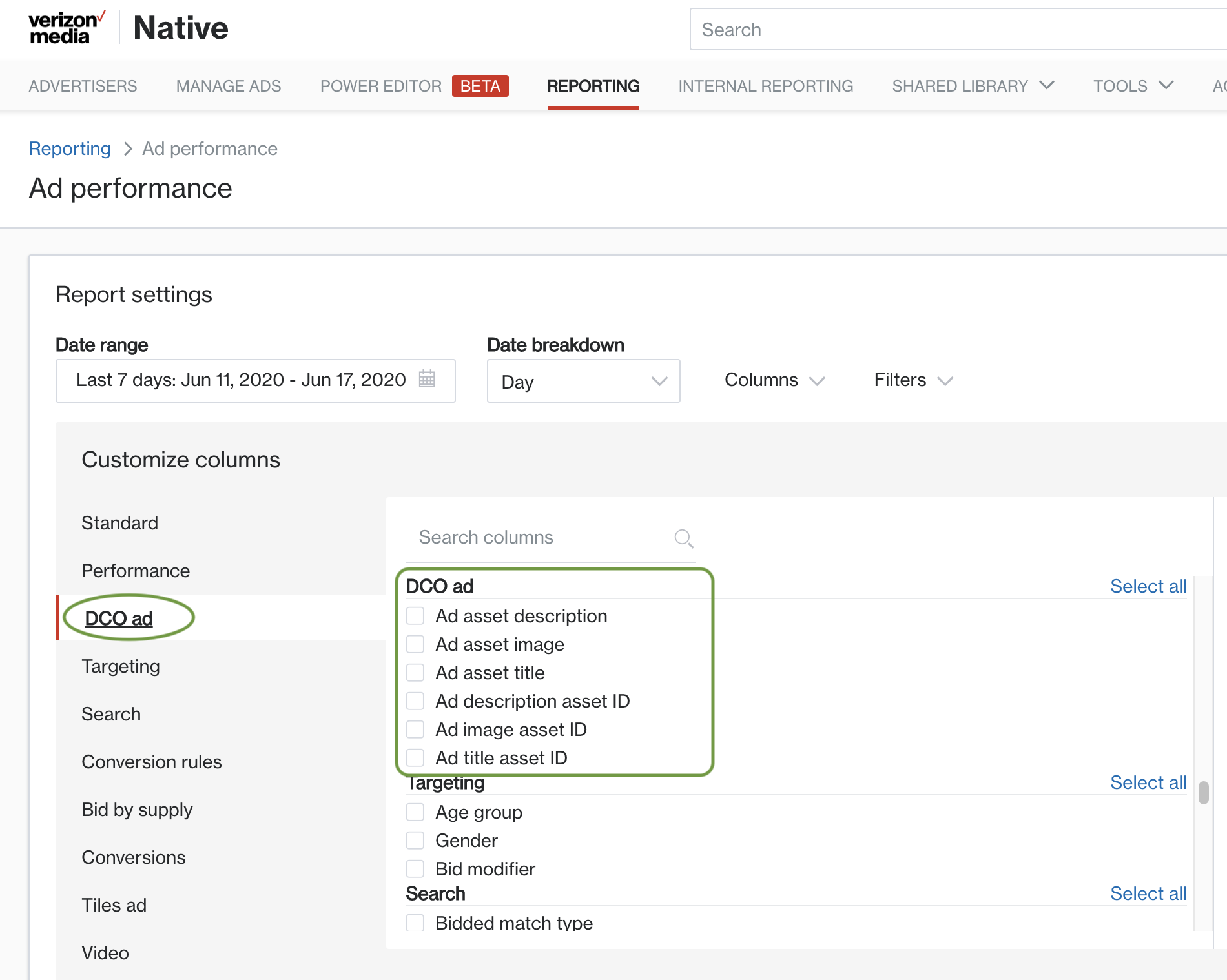 The ad report created above:

The following are some best practices for optimal DCO ad definition when working with ad assets:

Q: How are the ads optimized?

A: The algorithm optimizes to the ad combinations based on higher CVR.

Q: Will each of the 27 combinations be given an equal split of traffic in the beginning?

A: The 27 initial combinations will get initially an equal split across all traffic. That means, each gets the same chance of being served.

Q: What’s the difference between DCO and creative testing with even ad rotation?

A: DCO is the right way to achieve it. Creative testing by even ad rotation has a few flaws. It has usability issues because the advertiser needs to manage the various ad combinations. It has scalability issues because growing the number of ads in the campaign leads to a bottleneck of ads in the exploration. It also extends the time to mature from exploration because each ad gets a smaller exposure. And lastly, it has correctness issues since the ads in the campaign compete with each other. It means this approach can lead to favoring the ad with the first engagement while in DCO all variations get equal chance before a winner is selected.

Q: What’s the methodology of the optimization?